We are honoured to announce four stellar keynote speakers to the HASTAC 2013 line-up:

Joseph Tabbi, a leading authority on the effects of new technologies on contemporary  fiction and Professor of English at the University of Illinois at Chicago.

Paola Antonelli, Director of Research and Development and Senior Curator of Architecture and Design at the Museum of Modern Art

Cathy N. Davidson served from 1998 until 2006 as the first Vice Provost for Interdisciplinary Studies at Duke University, where she worked with faculty to help create many programs, including the Center for Cognitive Neuroscience and the program in Information Science + Information Studies (ISIS). She is the co-founder of Humanities, Arts, Science, and Technology Advanced Collaboratory, HASTAC (“haystack”), a network of innovators dedicated to new forms of learning for the digital age. She is also co-director of the MacArthur Foundation/Gates Foundation Digital Media and Learning Competition. During her time as the John Hope Franklin Humanities Institute Professor of Interdisciplinary Studies at Duke University, she has published more than twenty books, including Closing: The Life and Death of an American Factory (with photographer Bill Bamberger) and The Future of Thinking: Learning Institutions in a Digital Age (with HASTAC co-founder David Theo Goldberg), and Now You See It: How Technology and Brain Science Will Transform Schools and Business for the 21st Century (Viking). She blogs regularly on new media, learning, and innovation on the hastac.org website as well as on DMLcentral.net and Fast Company. She was appointed by President Obama to the National Council on the Humanities in 2011 and is the first educator to join the six-person Board of Directors of Mozilla. In October 2012, Cathy N. Davidson and David Theo Goldberg received Educators of the Year awards from the World Technology Network in recognition of their visionary contribution to science and technology in education through their work as co-founders of HASTAC.  <http://www.cathydavidson.com/>

In April of 1993 the Mosaic 1.0 browser was made available to the general public, ushering in the contemporary Information Age. In one generation, we have undergone tremendous changes in how we communicate, socialize, learn, do business, and engage in civic life. We rely on non-experts for information on sites such as Wikipedia and take the advice of strangers on everything  from restaurant recommendations to health care. Interactive digital technologies have changed how we learn in everyday life far faster than they’ve changed the structures, motives, and metrics of our educational systems. Until now. We are on the threshold  of a monumental transformation in higher education, one aimed at the needs and expectations of the next generation of resilient, connected, self-paced, peer-inspired, creative, multidisciplinary, and multicultural global learners.

Kia’s research involves in several research domains relating to 2D and 3D imaging, multimodal analysis, gestural interfaces, interactive multimedia, digital preservation, computer vision and computer music, in collaboration with many European and international organisations and individuals in the field. Large-scale projects include ‘Maestro’ on technology-enhanced learning (Coordinator), CASPAR on digital preservation and AXMEDIS on cross-media (Principle Investigator) with over 20M Euro research funding.
He has also worked on automated recognition and restoration of printed and handwritten music manuscripts, paper texture and watermark analysis. His Music via Motion (MvM) system allows users real-time control of musical sound using their physical movement. Kia has more than 150 publications and presented talks in over 30 countries including keynotes and invited lectures in Canada, China, France, Germany, Japan, UK, and USA. He has appeared on television and radio interviews such as BBC, Sky, and has been featured in the New York Times, Guardian, Financial Times, Sound on Sound, Photonics Spectra and others. Kia has also organised over 15 international events including conferences, exhibitions and a convention. <http://www.comp.leeds.ac.uk/kia/>

Building upon strong disciplinary knowledge, interdisciplinary collaborative explorations can reveals exciting insights, inspire innovations and create new opportunities to act on ideas and dreams for the future. This keynote presents a group of interdisciplinary collaborative projects at the University of Leeds Interdisciplinary Centre for Scientific Research in Music (www.ICSRiM.org.uk) involving ICTs and performing arts, to explore:
-Technology-enhanced learning;
-Trans-domain mapping (including sonification and visualisation) for artistic interpretation, instrument/performance augmentation and accessibilities;
-Further understanding in performing arts such as communication aspects and human/technology interfaces.
The talk analyses several case studies in the above mentioned contexts including the i-Maestro 3D Augmented Mirror on technology-enhanced learning for music (www.i-maestro.org) which focuses on string instrument, and a series of conducting interface projects exploring different aspect of gesture and interactivities, learning and digital preservation. With the findings from gestural analysis, this talk discusses explorations on musical instrument interfaces and augmentation, using the design of an interactive rock instrument from the Ruskin Rock project, as a case study (http://www.guardian.co.uk/music/2010/aug/18/stone-xylophone-evelyn-glennie). The new instruments ultilised digital signal processing techniques to enhance the tuning of the keys. The new interface explored new considerations on ergonomics, playability and expressivities, employing sensors and multimedia interface technologies to create an augmented instrument with user-centred design to enhance interactivities and expressivities.
The talk also presents latest research collaborations and activities, with the University of Leeds Cultural and Creative Industries (CCI) Exchange hub, to further understanding of interaction and intelligent interfaces in the performing arts through collaboration between science, arts and technology, to develop shared aims and far-reaching impacts.

Joseph Tabbi, Professor of English at the University of Illinois at Chicago. Joseph Tabbi is the author of Cognitive Fictions (Minnesota 2002) and Postmodern Sublime(Cornell 1995), books that examine the effects of new technologies on contemporary American fiction. He is the founding editor of electronic book review (ebr), and has edited and introduced William Gaddis’s last fiction and collected non-fiction (Viking/Penguin). His 2012 essay onGrafik Dynamo! (Armstrong/Tippett), appears online at Digital Humanities Quarterly, and another gallery essay on Mark Amerika can be found at the Walker Art Center’s phon:e:me site, a 2000 Webby Award nominee.  Also online (at the Iowa Review Web) is an essay-narrative, titled “Overwriting,” an interview, and a review of his early scholarly work. Tabbi is professor of English at the University of Illinois at Chicago. He has served as president of the Electronic Literature Organization.

In two essays, “Toward a Semantic Literary Web” (2006, ONLINE at http://eliterature.org/pad/slw.html) and “Electronic Literature as World Literature” (2010, Poetics Today), I set out a project for identifying literary qualities and marking literature’s present transformations within new media. The idea in these essays was to discern aesthetic and communicative qualities that I felt could be carried over to the present (e.g., Goethe’s and Marx’s unrealized call for the formation of a world literature “transcending national limits”), and those that could easily go missing (e.g., the materially bounded object whose aesthetic can be recognized and repeated by a generation of authors in conversation with one another).

Trying to hold onto both of these desirable literary qualities, I turn my attention in the present talk to the one place where such conversations are now being staged – not in scholarly journals or social media (online or in print) but rather, in databases. Specifically, I consider the open source, open access literary database. I settle on database construction as a necessary scholarly and technical complement to the creation of works, not for wholly archival purposes, but as a condition or destination for present creativity. The electronic database, by granting authors (and their critics) direct access to present discourse networks, opens possibilities that appear unique to literary writing in new media.

One point of reference in my talk will be the Electronic Literature Organization’s  Electronic Literature Directory (ELD version 2.0). The ELMCIP Knowledge Base, developed by Scott Rettberg in Norway, Simon Biggs in Scotland, and colleagues throughout Scandinavia, The U.S., and Europe, offers another, complementary point of entry. Brief descriptions of other literary archives, developed or in development in Montreal, Providence, Siegen, Sydney, and elsewhere, will indicate how interoperability can work at the level of databases, and how literary collaboration might at last begin to work across disciplines and institutions. I argue that the current, wide-ranging database construction (already a trans-disciplinary collaboration among scholars and programmers), is the necessary precondition to the emergence of the electronic ‘world literature’ that I described some years previously.

Literary works by John Cayley, Jason Nelson, Simon Biggs and others (who turn, or detourne, informatic databases into literary works) will be accessed through the above databases and discussed during the course of the talk.

Paola Antonelli, Director of Research and Development and Senior Curator of Architecture and Design at the Museum of Modern Art, New York. 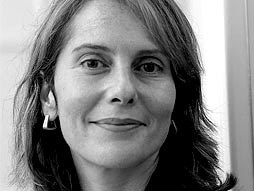 Paola Antonelli joined The Museum of Modern Art in 1994 and has organized more then a dozen exhibitions. Recent exhibitions include, SAFE: Design Takes On Risk (2006), Design and the Elastic Mind (2008), and Talk To Me: Design and the Communication Between People and Objects (2011). She lectures worldwide on art, science, design, and innovation, in settings ranging from peer conferences to global interdisciplinary gatherings such as the World Economic Forum in Davos and the Aspen Ideas Festival. Ms. Antonelli earned the “Design Mind” Smithsonian Institution’s National Design Award in October 2006, and in 2007, she was named one of the 25 most incisive design visionaries by Time magazine. Ms. Antonelli is a Senior Fellow of the Royal College of Art, London, and has received an Honorary Doctorate in Design from Kingston University, London, and from the Art Center College of Design, Pasadena.
See TED Talks < http://www.ted.com/speakers/paola_antonelli.html

Sensorium will serve as a catalyst for new ideas and experimentation linking existing labs in the Faculty of Fine Arts, fostering collaborative research, and encouraging community and industry partnerships.  finearts.yorku.ca/sensorium

From its launch by Orange in 2009, the Transmedia Lab set out to promote, assess and experiment with new forms of writing associated with the development of new uses and new technologies, contributing to the ever-growing phenomenon of transmedia storytelling.

M. Bouchet’s talk is sponsored by the French Consulate in Toronto and The Norman Jewison Series, Department of Film, York University